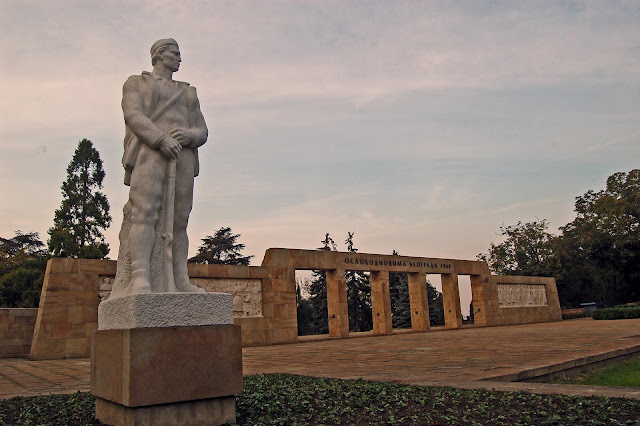 Across the street from Belgrade's New Cemetery and actually part of its complex lies the Liberators Memorial, a tribute to the Russians and Red Army soldiers and Yugoslav Partisans who liberated Belgrade in 1944. The sculpure seen here and the relief in the background are the works of sculptor Rade Stankovic, whose work I showed you (although then unknowingly, and thanks to reader "Knez," who told me!) last August.

Here's a blurb from the Belgrade National Museum's publication on Stankovic: "...Emulating Michelangelo, Rodin and Meštrović, Rade Stanković (1905-1996) created in plaster, stone and bronze a world of powerful movements in which he focused on representing a universal sculptural theme - human figure..."

Note--thanks to "Belgrader" in the comments below, I altered the title and made an addition to the text.
at October 19, 2010 8 comments: