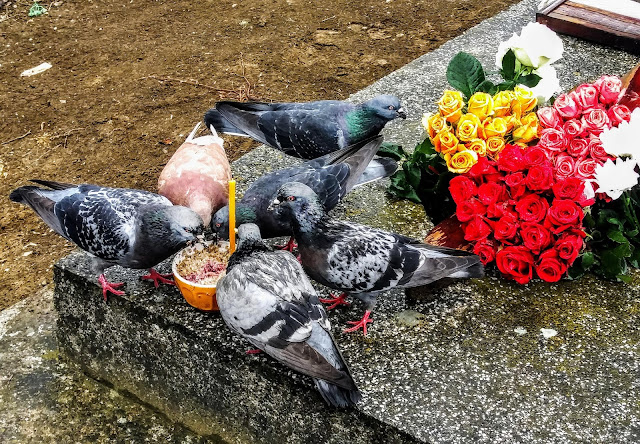 Just a little over one year ago, my dearest Serbian friend passed away after a long bout with cancer. I miss her, as do many of her friends.

About a week ago, her daughter held a one-year commemoration at the cemetery, as is the custom her. One of the customs is to place a small amount of wheat berry sweet upon which has been poured a bit of red wine and a candle inserted and lit. It was windy, so the candle did not stay lit for long. A priest holds a short ceremony at the grave site.

A moment later, a pigeon appeared. I know it was only interested in the wheat berry, as were its friends in the photo, but it reminded me of my friend's kindness to animals. At her home, she would always feed a dove that would land on her terrace sill. It soon learned to eat from her hand.

Her daughter, who now lives in her apartment, says this dove has not shown up since her mother passed.