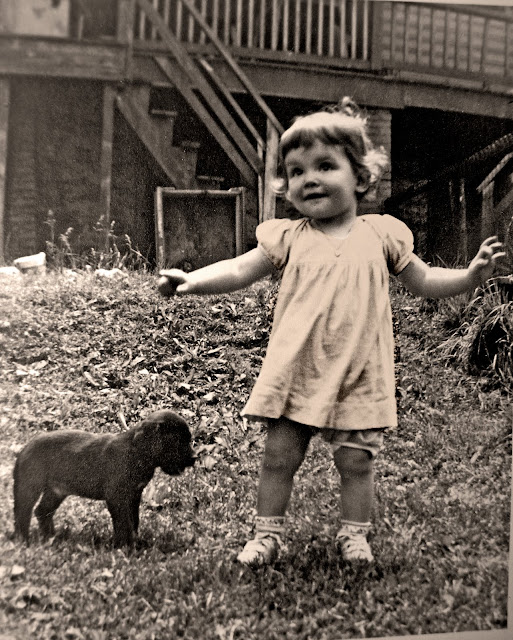 ...but fortunately not 'deeper in debt,' as goes Tennessee Ernier Ford's song, "Sixteen Tons." (Just saw on Wiki that he was an Aquarius, too; Feb. 13th!)

Here I am at somewhere between age 1 and two in my hometown of Harrisburg, Pennsylvania, though I don't know at whose place this was taken. My mother said the dog's name was Toby, but who he belonged to remains a mystery. Now I have a little black dog of my own... And I've learned not to let my slip, not to mention my underpants, hang out. Please--no comments about needing rubber pants again!!

I'm full of nostalgia and wonder when I look at photos of myself and family. This little girl grew up, traveled to far-off lands, one of which she stayed in, learned a couple of 'foreign-but-not-really-anymore' languages, married, had two children, fought cancer, became a widow much too early...and like everyone else of a similar age, has a mixture of sad and happy memories of her life.