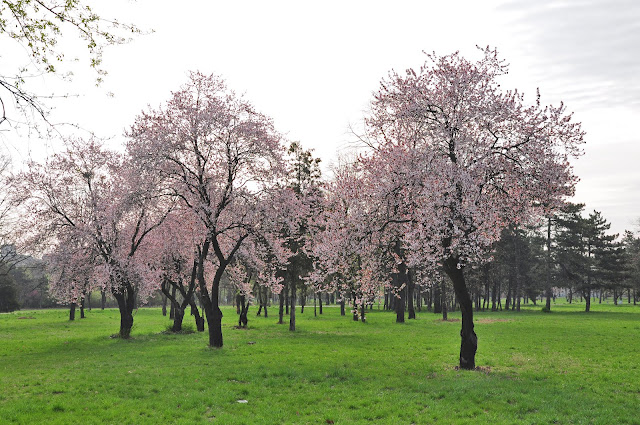 It's the April showers that have brought these not-quite May flowers...but tomorrow is May 1st...
at April 30, 2012 8 comments:

SUNDAY BRIDGES--How can you miss it? 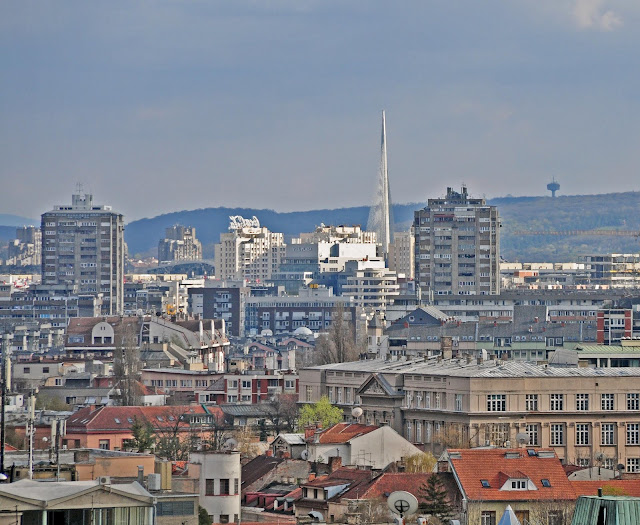 Not hard to see the tallest point of Belgrade's newest bridge, the Bridge Over Ada, even with this mishmash of architecture. This photo was taken from a hill in Zemun. 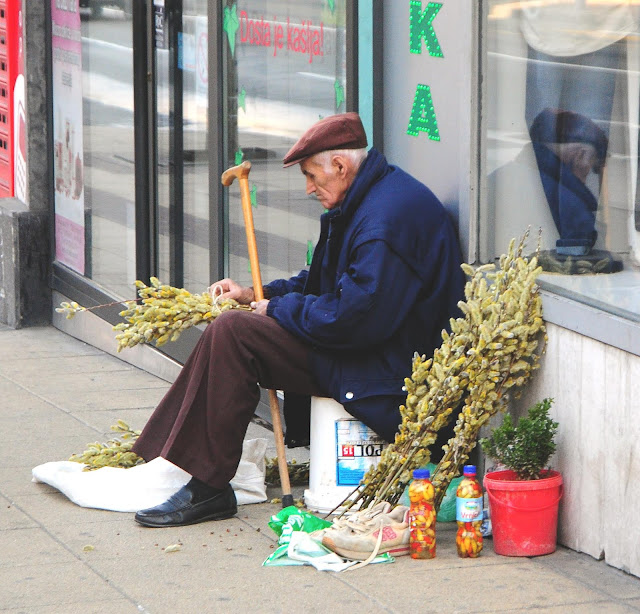 Patiently making bundles of pussywillows to sell, along with his bottles of fiery-hot homemade peppers, a plant, and a pair of used tennis shoes.

See other reflections at James' WEEKEND REFLECTION.
at April 28, 2012 10 comments:

SKYWATCH FRIDAY--View from "Venice" in Zemun 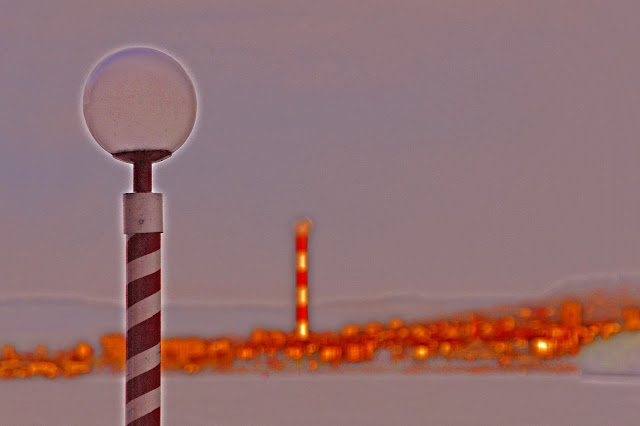 A bit bizarre color-wise, I'll admit, but I really liked the  juxtaposition of the distant heating plant tower and the light pole on the terrace of the Venecija (Venice) cafe in Zemun, part of which I showed you a while ago. 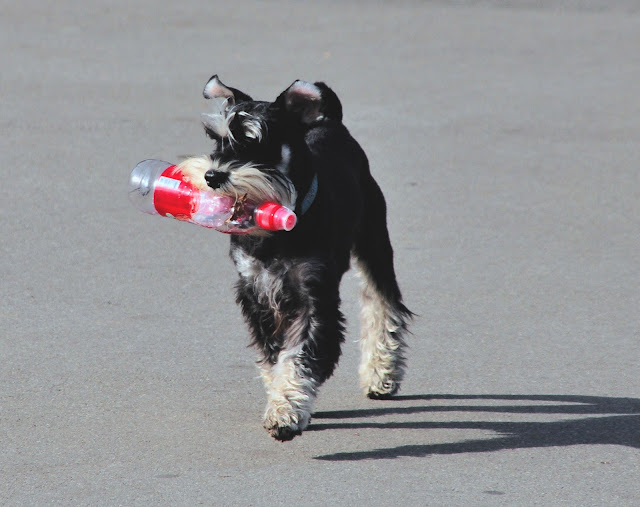 I planned on posting this photo to follow up this recent post,, but it was only after I looked more closely at this photo of this snazzy Schnauzer that I realized this isn't a Coke bottle...  Well, things go better for dogs with empty plastic bottles.
at April 26, 2012 10 comments:

ABC WEDNESDAY "O" is for "Only myself" 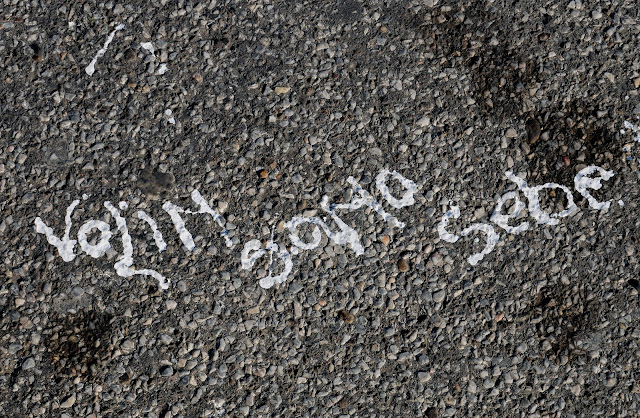 "Volim samo sebe" means "I love only myself."  Someone also used quite a bit of Wite-out on this sidewalk. 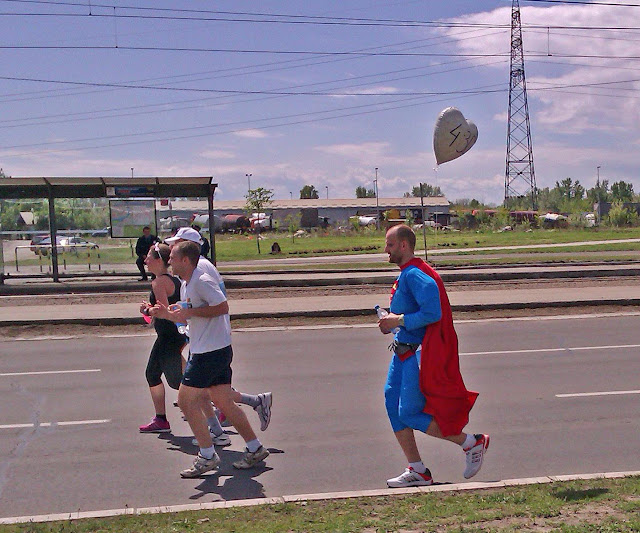 The 25th Belgrade Marathon was held last Sunday and despite his best efforts, Superman lost.  The marathon was won by James Kiptum Barmasi of Kenya, who finished in two hours, 16 minutes, and 1 second.  So much for "faster than a speeding bullet..."  I think the 4:30 on his balloon was when he planned to finish. 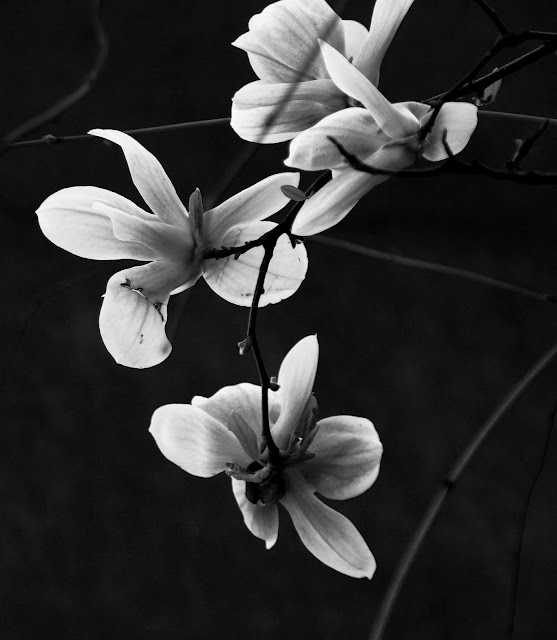 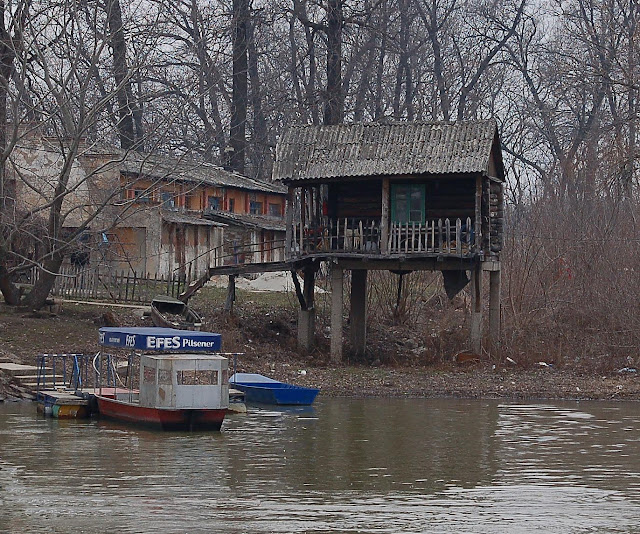 Just what the title says, along the Tamiš (TAH=meesh) River in Pančevo. 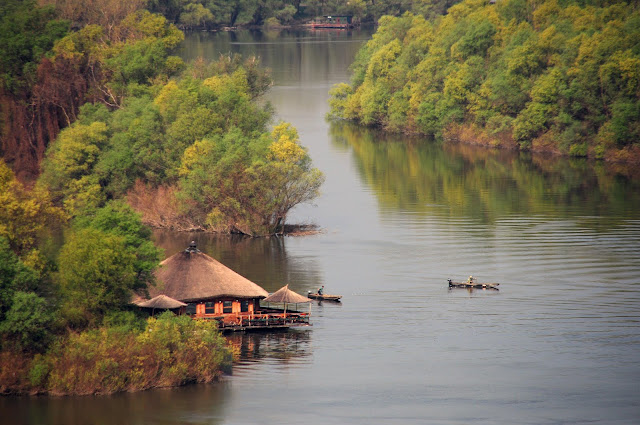 This restaurant on the confluence of the Danube and Sava rivers reminds me of when I was in Africa for a short while.

See other reflections at James' WEEKEND REFLECTION.
at April 21, 2012 15 comments: 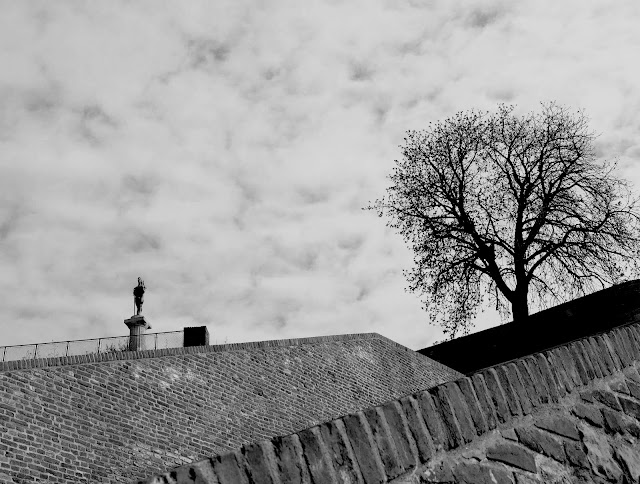 In contrast to yesterday's colorful post, here's another view of the statue of The Victor in Kalemegdan Park in black and white. These stairs that I am standing on lead down to the part of the park known simply as lower Kalemegdan that lies outside the fortress walls. 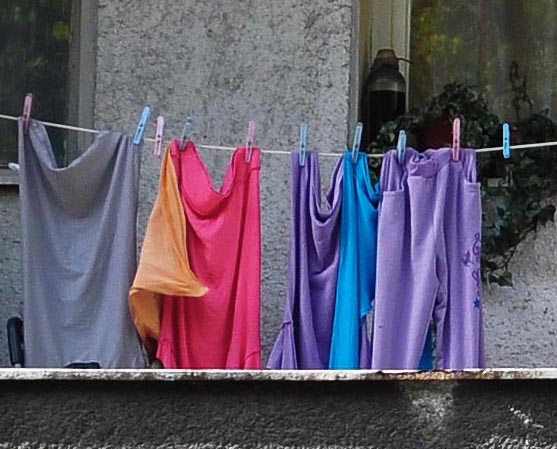 I've shown you colorful laundry so many times I don't dare link back....but the last one was right here. If you click that link, you'll find other links....so I guess I am linking.
at April 19, 2012 10 comments: 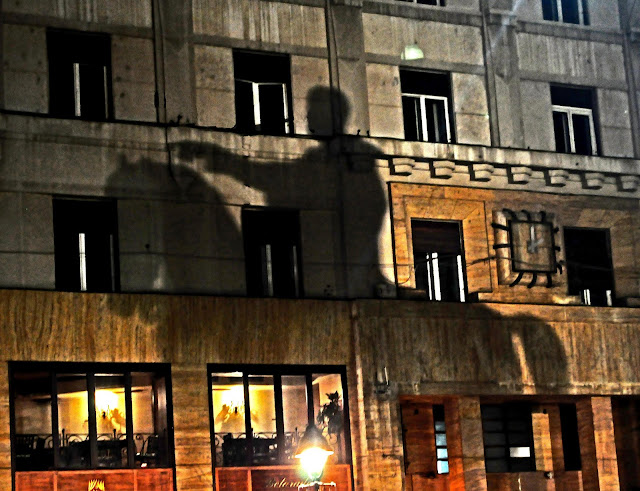 The shadow of the statue of Prince Mihailo Obrenović that I've shown you many times before, cast on a nearby building, at night, of course.

Never Noticed the shadow before.... 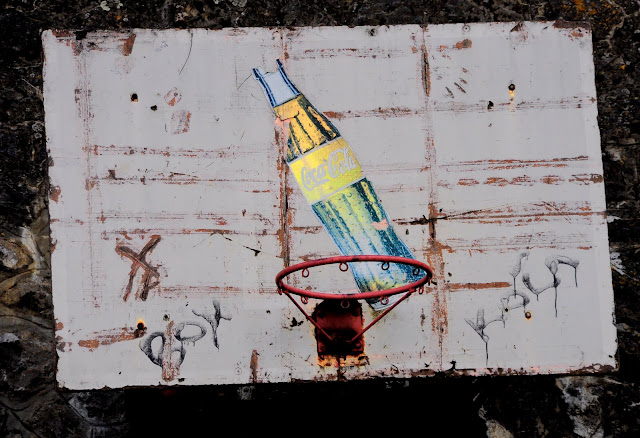 Not sure if anyone uses this hoop anymore...no net, but still usable. But people still drink Coke.
at April 17, 2012 9 comments: 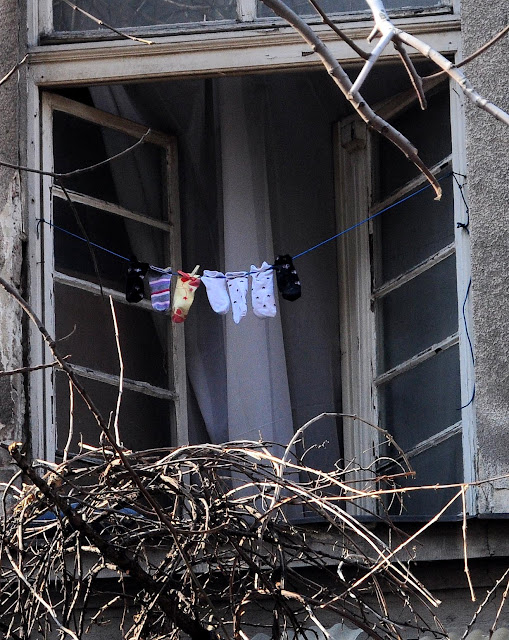 Even tiny socks seem to get lost in the wash. Only two matching pairs here. I know mine do...there is a gnome in my washing machine, I am sure.
at April 16, 2012 14 comments: 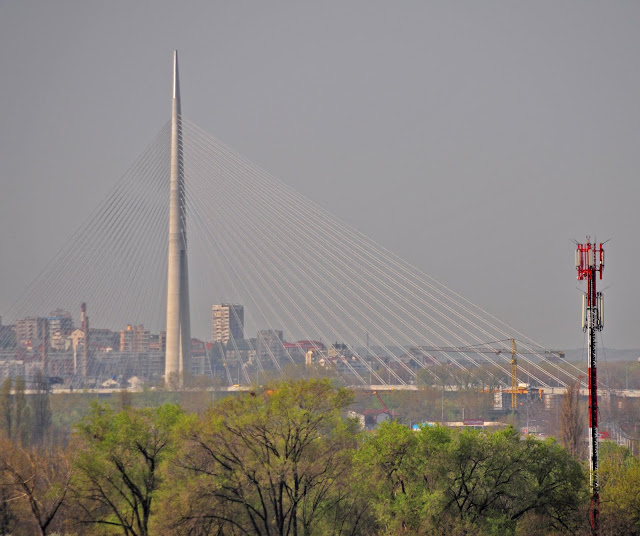 It's that bridge again, this time with an air siren tower to the right. During the NATO bombing of 1999, which began on March 24th of that year, this tower and others like it wailed at least twice a day. Its warning to take cover siren, nicknamed Šizela (she-ZEL-a) from the verb that means 'to freak out, panic', sounded at least once a day, and its twin sister, Smirela, (smee-REL-a), from the verb 'to calm down', followed at some point. If you'd like to listen to Šizela, you can do so right here. We did so for 78 days....still gives me goosebumps. 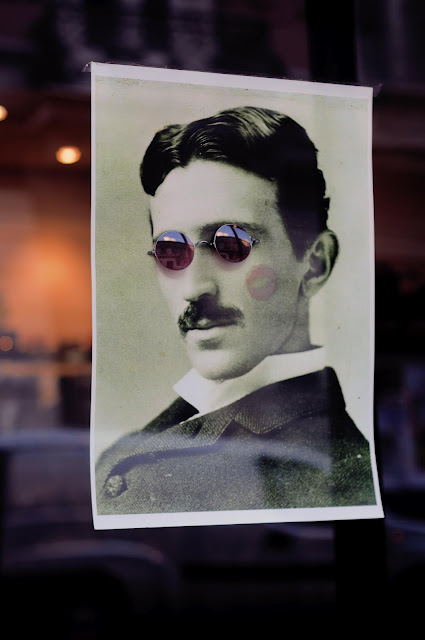 Serbian inventor, mechanical and electrical engineer Nikola Tesla looks quite dashing in these John Lennon-style shades on a poster on the door of an optician's shop downtown. Looks like he's even been kissed, too.

See other reflections at James' WEEKEND REFLECTION.
at April 14, 2012 6 comments: 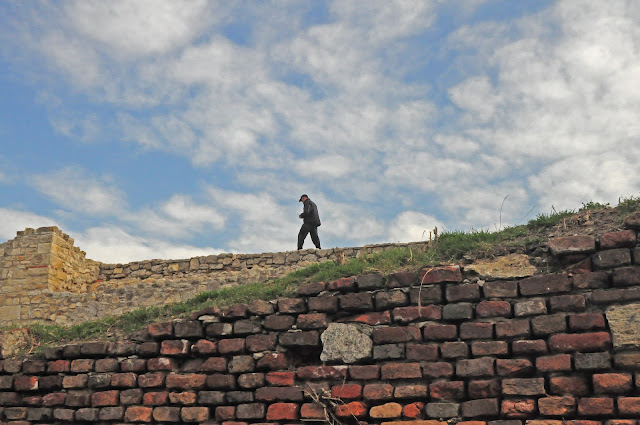 A security guard in Kalemegdan keeps an eye on things. I think. He'd better...it's Friday the Thirteenth. 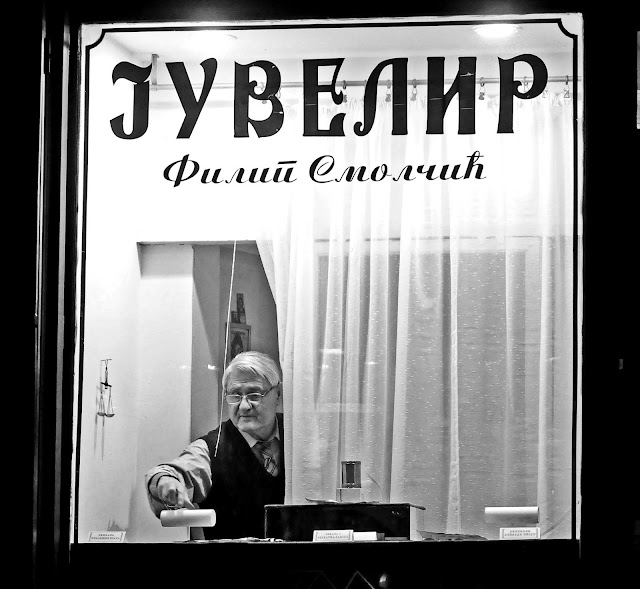 From my car window, I caught this jeweler putting away his wares for the night.
at April 12, 2012 9 comments:

The other day while walking in Tasmajdan Park I came across this group of oddly-dressed young people standing by the fountain (not on) on the left. It was a hot day, and they stood out in their heavy 'snowsuits'. Just as I was about to snap the shutter, they all fell to the ground! They remained there for a few minutes, then got up and moved on. They're part of an advertising campaign by MAXI supermarkets, a chain of about 500 or so supermarkets throughout Serbia.

Their suits show prices, one higher, one lower, and so their actions show that Maxi's prices are falling.... 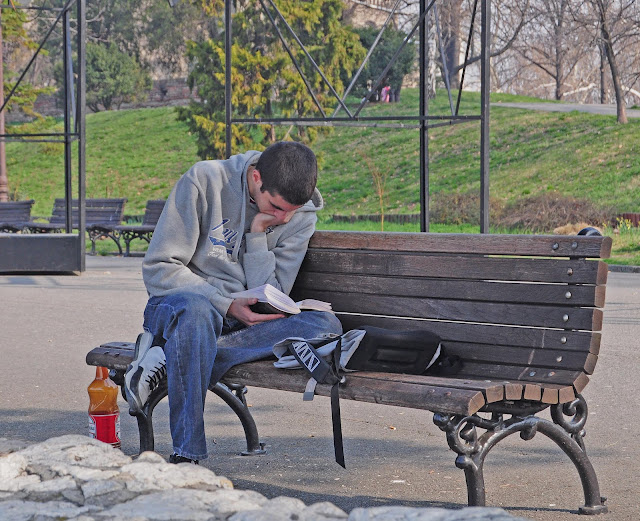 No, for sure it isn't Novak Djoković, since I know he wasn't in town when I took this photo, but it reminded me of him, just as this guy reminded me of Bill Clinton.
at April 10, 2012 13 comments:

Once more from behind. 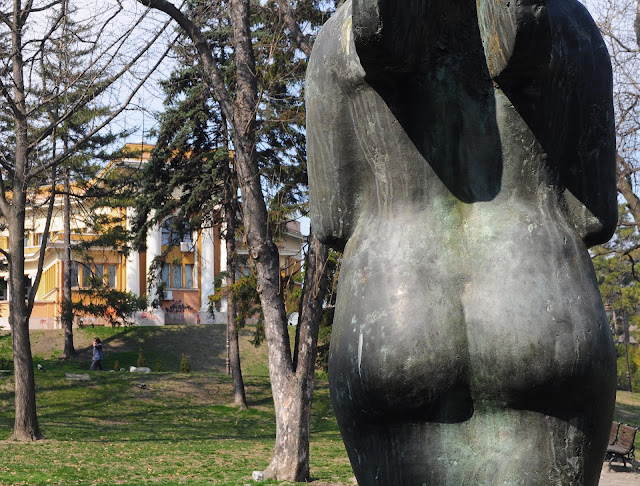 This post may remind you of another rear view from a short while ago. This large lady angel stands not far from the Cvijeta Zuzorić Pavilion, used primarily as an art exhibit venue. 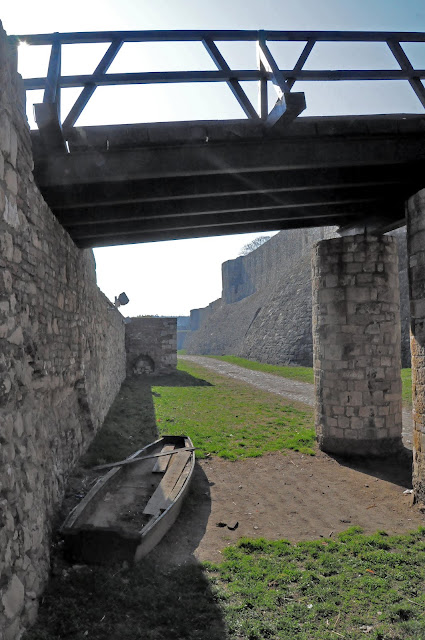 There once was a moat around part of Kalemegdan Fortress. This rowboat lies below the bridge to and from Despot's Gate, named for Despot Stefan Lazarević. 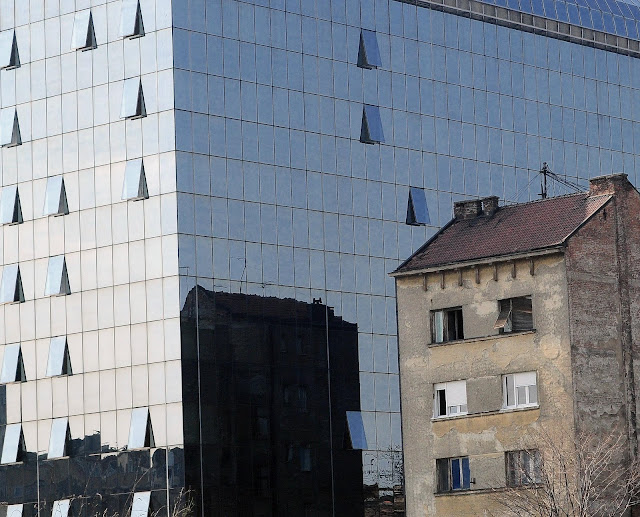 Big contrast between this modern and old building...but look the old shutters open out in the same way. Actually, so can the new white ones, but none are here.

See other reflections on James' WEEKEND REFLECTION.
at April 07, 2012 12 comments: No, not an old postcard, but looks like one, except for the gas station. I've shown you this scene before, but I liked how this sepia version looks.

Don't mess with Winnie the Pooh 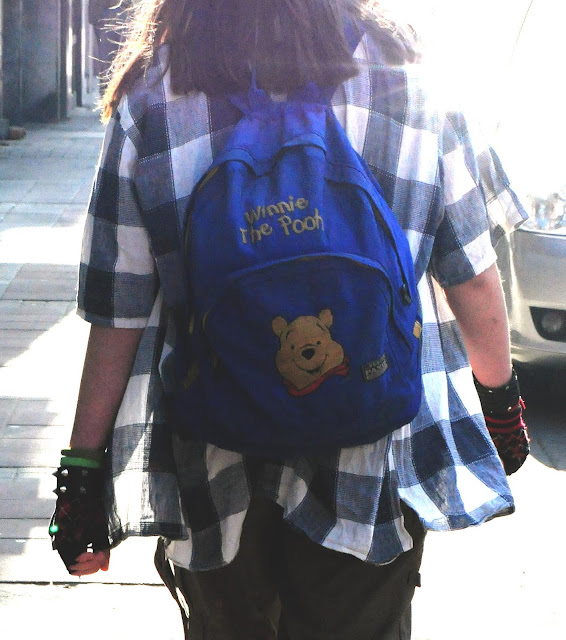 ABC WEDNESDAY - "L" is for "Look before you leap" 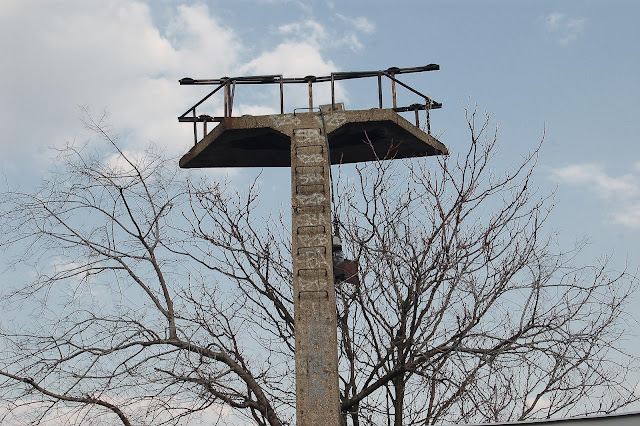 You won't quite make it to the pool from this diving tower, which was part of Tasmajdan Park's swimming complex. This whole area of the park, like the park itself, is being renovated. Gee, think how people used to climb up those metal rungs in their bare feet. Ow. 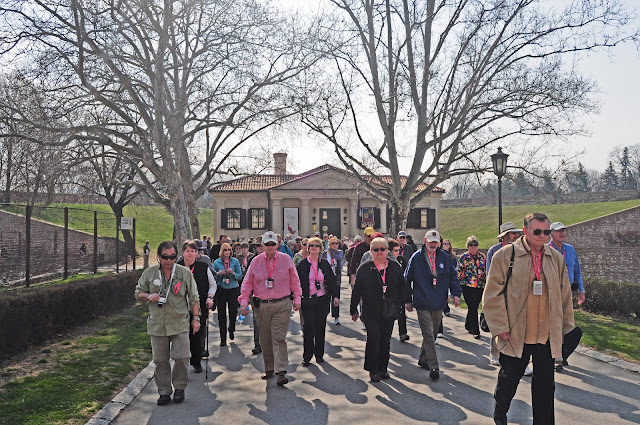 Spring brings many tourists to Belgrade like the ones above, who are spending a few hours in the city and Kalemegdan Park before returning to their cruise ship down the Danube.

The building in the back is a small gallery of Belgrade's Museum of Natural History, which is located in another part of the city.
at April 03, 2012 8 comments:

Greta and her person 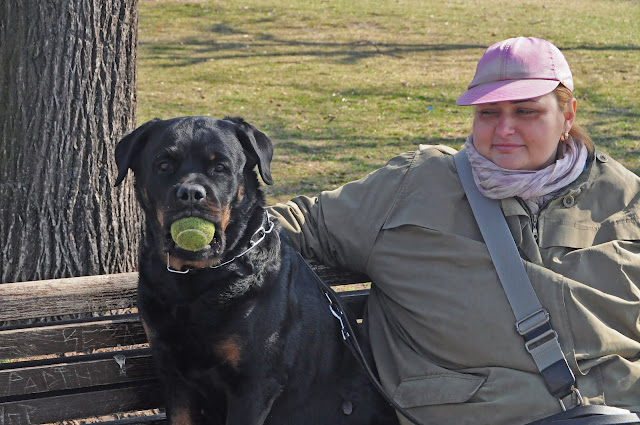 Bibi and I meet many dogs on our walks...and their persons, too. Greta, on the left, is all ready to play, while Bojana, her person, looks on lovingly.
at April 02, 2012 11 comments:

Email ThisBlogThis!Share to TwitterShare to FacebookShare to Pinterest
Labels: dog 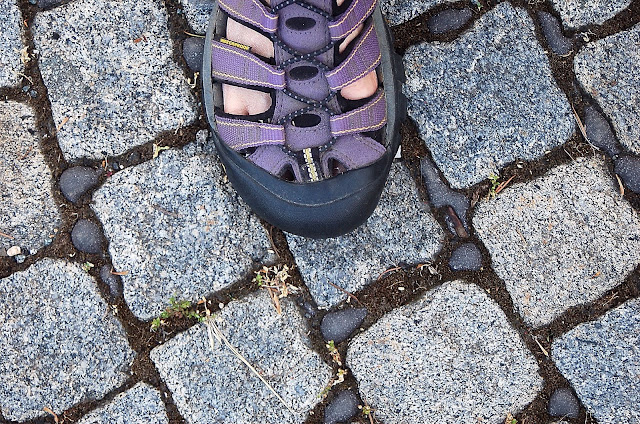 These are my faithful sandals that I showed you once before on the Brooklyn Bridge three years ago. They've trod over many parts of India, the US, and Qatar and are still in pretty good shape. Now they're preparing for another season of pounding the pavement (and cobblestones) of Belgrade.

Update on April 4th, 2012: The portal is back and Theme Day has been extended, so
Click here to view thumbnails for all participants
at April 01, 2012 12 comments: