The Čukur Fountain: Now you see it, now you don't 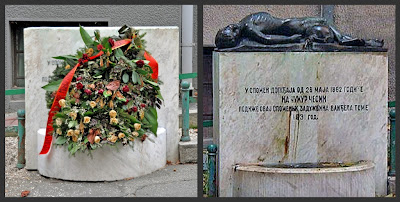 The bronze statue seen on the right is of a Serbian boy, who was killed in 1862 by occupying Turks in a skirmish over who had drawing rights from this fountain on Dobracina Street in downtown Belgrade. The boy's death initiated a movement for the liberation of Belgrade and other Serbian cities from Turkish rule.

This post goes out to a young Serbian lady from the US, who had written me for a photo of the fountain. I can only partially fulfill her request, since the statue you see above was stolen several months ago, and fortunately found, but very damaged. It is to be repaired and replaced soon. (I photo borrowed from another source on the Internet, whereas the photo with the wreath in honor of the missing statue is mine.)