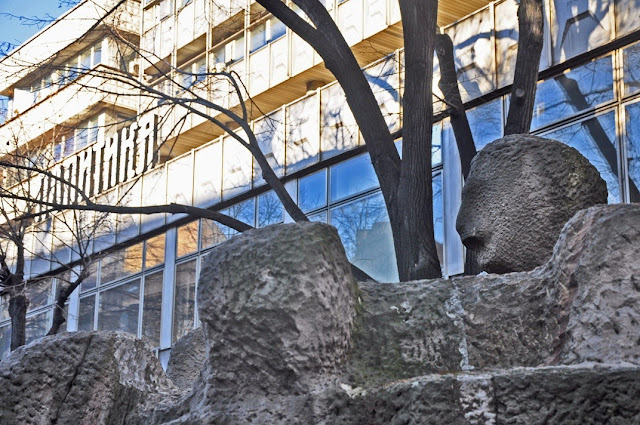 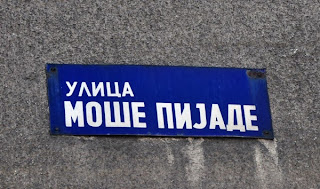 I pass by this statue in front of Belgrade's largest newspaper building (Politika)  just about every day.  I've noticed the massive statue of Moša Pijade many times, but never gave it much thought until a little further on a woman asked me for directions to Decanska Street, which at first didn't ring a bell.

Fortunately, another passer-by came to my aid, telling the lady that Decanska Street used to be called Moša Pijade Street, but since communist street names were replaced, out went Moša.

Or not quite.  The sign you see is still on the street that is now called Decanska, at least in one place where I took the photo....

So here's a little bit about  Moša Pijade:

Moša Pijade (MO-sha PE-ya-deh) 1890-1957, a Shephardic Jew,  was one of the senior communist leaders in the former Yugoslavia, and a close confidante of Marshal Josip Broz Tito.

He first went to study art in Munich and Paris but soon took up journalism and developed a penchant for radicalism. He was imprisoned along with many others after World War I for his pro-Communist sympathies. In prison he met and befriended many of the people who were later to become the leaders of Yugoslavia

He fought in the Anti-Nazi resistance among the Partisans (who unlike the ones in other parts of Eastern Europe were not anti-Semitic and openly welcomed Jews into its ranks). He quickly rose through the ranks and was appointed by Tito (who was an ethnic Croat) to suppress all 'counter revolutionary activities'. Pijade became so feared and hated by the Serbs (especially in places like Montenegro) because of his policies, that mothers would warn their children that if they misbehaved 'Mosa' would come and get them.