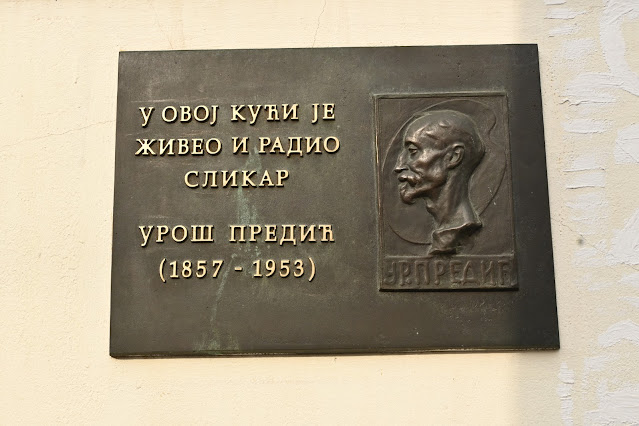 For many years and in many cities I have seen plaques on walls commemorating a notable person.
I am truly surprised I never saw this one  before, since it is on a wall that I very frequently pass by.
Here is what Wiki says about the painter Uros Predic (OOR-ush PRAY-deetch) and his very well-known painting, the Kosovo Maiden:
"The Kosovo Maiden or Maiden of the Blackbird Field (Serbian: Косовка девојка / Kosovka devojka) is the central figure of a poem with the same name, part of the Kosovo cycle in the Serbian epic poetry. In it, a young beauty searches the battlefield for her betrothed husband and helps wounded Serbian warriors with water, wine and bread after the Battle of Kosovo in 1389 between Serbia and the Ottoman Empire. She finally finds the wounded and dying warrior Pavle Orlović who tells her that her fiancé Milan Toplica and his blood-brothers Miloš Obilić and Ivan Kosančić are dead. Before the battle they had given her a cloak, golden ring and veil for the wedding as a promise of safe return, but they were slain and Pavle pointed to the direction of the bodies. The poem finishes with;

"O wretch! Evil is your fortune!
If I, a wretch, were to grasp a green pine,
Even the green pine would wither."

The poem became very popular as a symbol of womanly compassion and charity. Uroš Predić took up the theme in 1919 with an oil painting of the same title. In 1907, the sculptor Ivan Meštrović created a marble relief of the subject as a part of his Kosovo cycle. Another Croatian artist, Mirko Rački, painted a version of Kosovo Maiden."

Here's the painting. And today marks the beginning of another dark era in Serbian history, the 1999 NATO bombing of Yugoslavia. 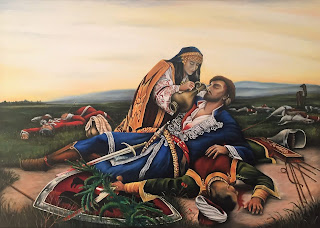