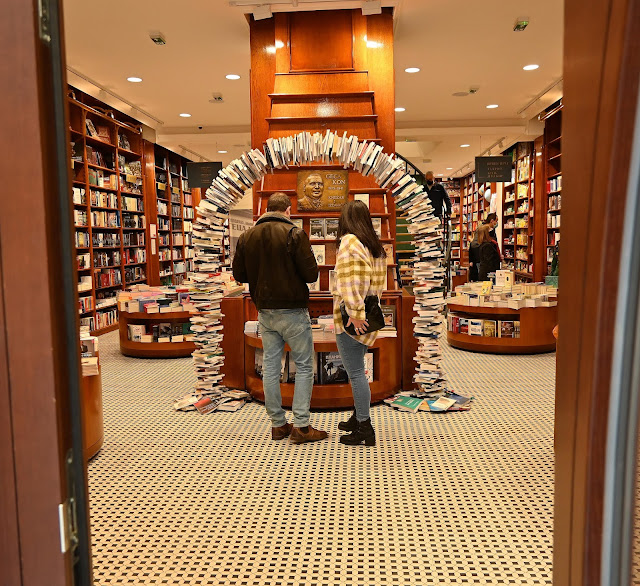 This bookstore, as you will read below, has been around a long time. It is located on Belgrade's pedestrian street, Knez Mihailova where I often walk. A couple of months ago, I noticed there was a sign that said they were renovating...which is more often than not a sign of impending doom for the original shop.

Fortunately, such was not the case, and I am happy to say that the renovation is completed and done without major modernization. Just spiffed up!

Here's what Wiki says about the person for whom the bookstore was named (In Serbian his name is transcribed as Geca Kon): Geca Kon also spelled Gaetz Kohn (Serbian Cyrillic: Геца Кон; 2 August 1873 – 1941) was a Serbian publisher.

His father was a rich rabbi and was the director of an elementary school. Unable to complete school, Kon moved to Belgrade in 1889. In Belgrade, he found work in the bookshop owned by Frederick Breslauer. He worked in the shop until 1894, then moved to Novi Sad, staying there for a year.

In 1901 he established a bookselling and publishing business which soon became the largest in Yugoslavia. From his premises in Belgrade he published over 3,500 books before his business was closed in 1941 with the Axis Invasion of Yugoslavia.

He was attacked for being Jewish in the anti-semitic journal Balkan and arrested when the German army arrived in Belgrade.

Glad they are back in business. Some history there for sure.....and the shopt surives.