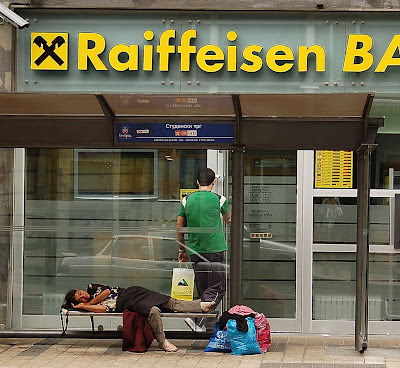 This scene reminds me of a famous painting byHenri Julien Félix Rousseau (1884-1910), a French Post-Impressionist Naive or Primitive painter. He is also known as Le Douanier (the customs officer) after his place of employment. Rousseau painted many scenes of jungles and other exotic places, claiming to have been inspired by the rainforests of Mexico where he said he'd done his military service...but he hadn't. He'd simply spent hours in Paris's Jardin des Plantes, or botanical gardens, which also have a small zoo. Ridiculed during his life, he came to be recognized as a self-taught genius whose works are of high artistic quality. This painting, entitled La Bohemienne Endormie or The Sleeping Gypsy, is one of my favorites. Years after being painted in 1897, the gypsy woke up in the MOMA in New York in 1939, thanks to the donation of Mrs. Simon Guggenheim, and then went back to sleep. (If you're wide awake, you can see me somewhere in this photo taking the picture....)

"Louis" wonders, after seeing all the bags at the feet of the sleeper, if this person is homeless or is just worn out from shopping? Literally 'shop 'til you drop'.

I like your photo! I viewed Rousseau's 'The Sleeping Gypsy' many years ago while prowling the NYC museums and I understand and share your attraction to the painting. Thanks for the interesting information on Rousseau; just enough to send me to Wikipedia for more information.

Hello! Bibi is briefly checking her email and blog while on vacation--Louis, the person is one of Belgrade's many gypsies, who are not really homeless, since they have various camps around the city. I imagine the bags are full of her findings from things that have been given her or thrown away.

I was here. I did look at your picture(s) and I did read what you wrote about them. I could say how great you are and how beautiful your work is but alas I would soon run out of things to say on the next blog I visited, so I just left this to prove I stopped and said a few words; and I am not a lurker or a visitor, but I am a commentator.

I think I saw you double.

me, too -- double, that is. Certainly way too early for drunk, so must be wide awake. (Mais ou est le drole de chien?)
Love your 21st-century take on Rousseau!

I had to go and check the artist and the painter out after the post. Very striking image. It is incredible to think that he never travelled to the places he emulated. So, is Bibi in the right window as you look at the pic?

Skateboarding has no hours. These young boys were up late, probably much to the chagrin of nearby tenants, honing their skills. See other s... 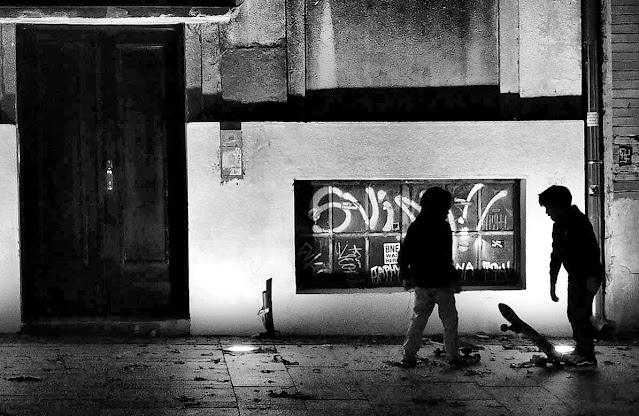